Vernon Coleman: Was Britain taken into the EU illegally?

This is a followup to a post about the issue of sovereignty and Britain’s membership of the EU I put up a while back. These are weighty issues the public needs to consider. Needless to say, the BBC won’t be promoting in depth debate about the matter, so it’s up to bloggers and journalists to do the job. Actually, not many journo’s seem to want to raise their heads above the parapet either. I know it’s dull stuff, but please read and think about this. It’s up to us to let the political class know we don’t take kindly to having our liberties, fought for since Magna Carta, signed away to an unelected foreign commissariat which subjects us to summary extradition through European arrest warrants, dictates how we (dis)organise flood defences, and forces us to put the ‘human rights’ of criminals before those of their victims. 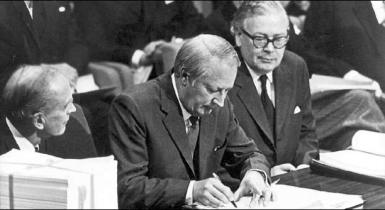 Was Britain Taken Into The EU Illegally?
by Vernon Coleman – 2011

Many constitutional experts believe that Britain isn’t actually a member of the European Union since our apparent entry was in violation of British law and was, therefore invalid.

In enacting the European Communities Bill through an ordinary vote in the House of Commons, Ted Heath’s Government breached the constitutional convention which requires a prior consultation of the people (either by a general election or a referendum) on any measure involving constitutional change. The general election or referendum must take place before any related parliamentary debate. (Britain has no straightforward written constitution. But, the signing of the Common Market entrance documents was, without a doubt, a breach of the spirit of our constitution.)

Just weeks before the 1970 general election which made him Prime Minister, Edward Heath declared that it would be wrong if any Government contemplating membership of the European Community were to take this step without `the full hearted consent of Parliament and people’.

However, when it came to it Heath didn’t have a referendum because opinion polls at the time (1972) showed that the British people were hugely opposed (by a margin of two to one) against joining the Common Market. Instead, Heath merely signed the documents that took us into what became the European Union on the basis that Parliament alone had passed the European Communities Bill of 1972.

Some MPs have subsequently claimed that `Parliament can do whatever it likes’. But that isn’t true, of course. Parliament consists of a number of individual MPs who have been elected by their constituents to represent them. Political parties are not recognised in our system of government and Parliament does not have the right to change the whole nature of Britain’s constitution. We have (or are supposed to have) an elective democracy not an elective dictatorship. Parliament may, in law and in day to day issues, be the sovereign power in the state, but the electors are (in the words of Dicey’s `Introduction for the Study of the Law of the Constitution’ published in 1885) `the body in which sovereign power is vested’. Dicey goes on to point out that `in a political sense the electors are the most important part of, we may even say are actually, the sovereign power, since their will is under the present constitution sure to obtain ultimate obedience.’ Bagehot, author of The English Constitution, 1867, describes the nation, through Parliament, as `the present sovereign’.

Precedents show that the British constitution (which may not be written and formalised in the same way as the American constitution is presented) but which is, nevertheless, enshrined and codified in the Magna Carta (1215), the Petition of Right (1628), the Bill of Rights (1689) and the Act of Settlement (1701) requires Parliament to consult the electorate directly where constitutional change which would affect their political sovereignty is in prospect. (The 1689 Bill of Rights contains the following oath: `I do declare that no foreign prince, person, prelate, state or potentate hath or ought to have jurisdiction, power, superiority, pre-eminence or authority within this Realm.’ Since this Bill has not been repealed it is clear that every treaty Britain has signed with the EU has been illegal.)

So, for example, Parliament was dissolved in 1831/2 to obtain the electorate’s authority for the Reform Bill and again in 1910 following the Lord’s rejection of the Liberal Finance Bill.

In 1975, when the Government changed, Harold Wilson sought to put right the clear constitutional error by organising a retrospective referendum (something quite unprecedented in British history) designed to obtain the permission of the British people for Britain to join something it had already `joined’.

Wilson’s referendum was inspired solely by the realisation that the consent of the electorate ought first to have been obtained before we joined the EEC. The lack of legitimacy of the European Communities Act brought about the decision by the incoming Prime Minister and Labour leadership that a referendum should be held in preference to yet another general election.

But, almost inevitably, the question asked in the referendum was also illegal since voters were asked: `Do you think that the United Kingdom should stay in the European Community (the Common Market)?’

The problem was that since Heath had ignored the constitution duties and requirements of Parliament and had signed the entrance documents illegally the words `stay in’ were deceptive. We couldn’t stay in the EEC because, constitutionally, we had never entered. We couldn’t enter the Common Market because Parliament did not have the right to sign away our sovereignty.

The referendum Wilson organised to remedy Heath’s constitutional breach misled the electorate on a simple constitutional issue and was, therefore, itself illegal. (Wilson’s referendum was passed after a good deal of very one-sided propaganda was used to influence public opinion. If the nation had voted against our `continued’ membership of the EEC the political embarrassment for all politicians would have been unbearable.)

Attempts through the courts to annul our membership of the European Union on the basis that Parliament acted improperly have failed because Parliament, through its legal sovereignty, is the source of the law in Britain and the courts are, therefore, unable to challenge any Parliamentary Act.

Only Parliament can reclaim the legislative powers that Heath and subsequent Prime Ministers have handed to the European Union.

And so, only when Parliament is filled with honest politicians (not inevitably an oxymoron) who are not controlled by the private party system will the mistake be rectified and our membership annulled.

Britain’s entry into the Common Market (later to be transformed into the EU) was also illegal for another reason. The Prime Minister who signed the entry documents, Edward Heath, later confirmed that he had lied to the British people about the implications of the Treaty.

Heath told the electorate that signing the Treaty of Rome would lead to no essential loss of National Sovereignty but later admitted that this was a lie. Astonishingly, Heath said he lied because he knew that the British would not approve of him signing the Treaty if they knew the truth. Heath told voters that the EEC was merely a free trade association. But he was lying through his teeth. He knew that the original members of the EEC had a long-standing commitment to political union and the step by step creation of a European superstate.

Edward Heath received a substantial financial bribe for taking Britain into the EU when he was Prime Minister. (Heath was no stranger to bribery. One of his aides bribed a senior Labour Party official £25,000 for details of Harold Wilson’s election tactics.) The reward of £35,000, paid personally to Heath and at the time a substantial sum of money, was handed over to him (in the guise of The Charlemagne Prize) for signing the Treaty of Rome.

Because of Heath’s dishonesty we never actually joined the Common Market. And so all the subsequent treaties that were signed were illegal.

Britain’s Treason Act (1351) is (at the time of writing) still in place. It states `that treason is committed when a man be adherent to the King’s enemies in his realm, giving them aid and comfort in the realm’.

And under the Treason Felony Act (1848) it is treason if `any person whatsoever shall, within the United Kingdom or without, devise or intend to deprive our most gracious Lady the Queen (Elizabeth) from the style, honour or Royal Name of the Imperial crown of the United Kingdom.’

Heath committed an act of treason. He betrayed the Queen and he deliberately misled the British people.

Does any of this really matter to politicians?

Is there any hope that Parliament will repeal the 1972 European Communities Act and restore sovereignty to the people? Not in the immediate future.

But the errors made by Heath and Wilson mean that when we want to leave the EU it will be very easy.

Because, officially, we never joined.

An independent British Parliament would simply have to pass one short Act of Parliament and give notice to the EU and we would be out of this accursed club.

Copyright Vernon Coleman 2011
Taken from Vernon Coleman’s book OFPIS (for details of how to purchase a copy see the bookshop on this site.)

The great Brexit stitch-up – behind the smoke and mirrors