The propaganda effort to scare the bejeezus out of everybody works on a simple strategy:

So “climate change” becomes a propaganda trigger word endlessly repeated by by propaganda outlets/lie factories known by such misleading titles as “newspapers” or “main stream media”.

Here is yet another example of how it works. 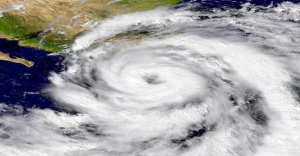 As the peak of the Atlantic hurricane season arrives, weather forecaster Chris Martz tries to inject some sanity into the clamour around the latest weather event to hit the headlines. This is an extract from the full article, which as you might expect offers a more in-depth view.We’ve made it three weeks without extreme weather and/or climate change hysteria making rounds on social media. Unfortunately, that streak has come to an end, making the lives of most weather forecasters like me a lot more difficult.

We are quickly approaching climatological peak of the Atlantic hurricane season¹ (September 10th) (Figure 1), thus it should be NO surprise to anyone that we have seen an uptick in tropical activity. However, I stand corrected － people are losing their minds about it.
– – –
Debunking the SST myth

I want to debunk the popular myth that has been circulating around the internet. Warmer sea surface temperatures (SST) does not guarantee that hurricanes will become more frequent or more intense.

While warm water temperatures extending from the surface down to around 150 feet (45.72 meters) below the ocean surface are required to be warmer than 80°F (26.67°C) for “fuel” for a tropical cyclone to develop,⁴ there are many other factors that govern hurricane activity not only on short-term time scales, but also decadal and millennial time scales, the latter of which I’m not going to explore in this article.

Warmer sea surface temperatures do not spontaneously spawn hurricanes. It just doesn’t work that way. Most of the time, there has to be a pre-existing atmospheric disturbance, preferably an area of low pressure where thunderstorms can form around (as that’s essentially what a hurricane is).

Low atmospheric pressure is caused by the convergence (meeting) of winds in the low levels of the atmosphere. Where these winds meet, they are forced to rise.

In the Northern Hemisphere, low pressure systems spin counterclockwise as a result of the Coriolis Force. The Coriolis Force in and of itself initiates vorticity in the atmosphere whereby winds can converge at the surface.

In addition to low-level convergence, the atmosphere in the lower to mid-levels of the troposphere must be fairly saturated in order for tropical cyclogenesis.⁴ The air becomes more humid if there is more evaporation occurring, which is a function of warm sea surface temperatures.⁴

Once the atmosphere in the low and mid-levels of the atmosphere is saturated, that means clouds will form as the air reaches the dew point temperature whereby water vapor must condensate out into liquid water droplets.⁴

If there is very high thermodynamic instability, or a sharp decrease in temperature with altitude, then more condensation will occur. The more condensation that occurs releases latent heat into the atmosphere, causing it to warm up (Figure 3).⁴

As the warmer air rises and expands, it’s forced to diverge once it reaches the tropopause and flow clockwise, thereby decreasing the air pressure at the surface.⁴

If the outflow of winds high in the troposphere is outpacing the converging winds at the surface, the air pressure will decrease around the center of the storm.⁴ If the central air pressure in the eye decreases, the storm will strengthen.⁴

The above article is from Tallbloke’s Talkshop. Please visit Tallbloke for more great articles.

Oh, what a lovely mess! “Climate Change” gaslighting, more about

When the rhetoric is more extreme than the weather