Interesting perspective from a leading immunologist in the UK.

The Immunologist, Sir John Bell, probably suffers from common sense syndrome, a condition to which the government is evidently thoroughly immune, and he innocently assumes that science or being sensible have something to do with the government’s strategy.

The government will continue dreaming up feeble excuses to lock down in an effort to wear down resistance to their experimental “vaccines”.

The manifest unworkability of lockdowns, masks and social distancing are of little concern to the criminals behind this operation. If their workability were a concern, the government would have stopped doing them.

Their purpose is not to “save the NHS” or “save lives” or what-have-you. It is to (a) implant in the public mind the notion there is as serious reason to be terrified going on and (b) bring about submission  to the vax program.

The goal is to get everyone vaxed and the “emergency” and its attendant misery and inconvenience will be kept going (with a great show of fake reluctance) until that goal is achieved or the criminals behind this hoax are brought down, whichever is the sooner.

We really need to start asking the obvious question: WHY this evident obsession with getting the entire citizenry vaccinated to “protect” them from a bug that is little or no threat to the vast majority of people, with an average age of fatality of 82.

This obsession has driven the falsification of the stats, the fraudulent use of the PCR test, the spending of 1.6 GBP of taxpayers’ money to finance a marketing blitz designed to ramp up the fear, an historically unprecedented ignoring of adverse reactions now far more severe and numerous than all other vaccines combined and the willful suppression of workable remedies that have been known about from  the outset.

The rush to mass-vaccinate is clearly NOT driven by genuine concerns for the lives of the citizenry because the lives of the vast majority are not threatened and for the small minority who are, remedies exist in any case.

So what IS driving this vaccine push? Profits for the vax oligarchs? Or is there something about these vaccines and what they do that we have not been told?

PS. The original feature included an extract from The Sun (see below) breathlessly seeking to scare its readers with the idea that a “third wave” is underway. This piece of shining journalism is geared to ramp up the fear yet again just when we thought it was safe to emerge from hiding. But to understand the motives behind the  Sun’s contribution the the sum of human woe, it is only necessary to understand who the journalists of The Sun work for: Rupert Murdoch.

Rupert Murdoch owns the biggest vaccine company in Australia. His family has been deeply immersed in that industry for generations, and he has partnerships with Glaxo and with all the big vaccine makers. Hence the Sun’s effort to keep the Covid Terror going.

Leading Immunologist: ‘We Can’t Hide Down A Hole Every Time There’s A New Variant’

Says it’s time to “move on” with reopening society

A leading immunologist has advised the UK government to “move on” with reopening society, warning that coronavirus is “here to stay” and that it makes no sense trying to hide every time a new variant emerges.

The BBC reports the comments by Sir John Bell, a Chair of Medicine at the University of Oxford, member of the Office for Strategic Coordination of Health Research (OSCHR), and a leading member of the government’s vaccine taskforce.

In an interview with BBC Radio Four, Bell urged that “If we scamper down a rabbit hole every time we see a new variant, we’re going to spend a long time huddled away.”

Bell further asserted that the virus “is here to stay probably forever”, adding that there is a “need to get a bit of balance in the discussion.”

Bell said the government needs to focus on reducing “hospitalisations, serious disease and deaths” rather than the fruitless task of reducing cases through lockdowns and other restrictions.

The immunologist urged that the focus needs to be on the suppression of the virus “around the world because otherwise we’re just going to sit here and get slammed by repeated variants that come in the door.”

Bell noted that the UK’s “numbers don’t look too intimidating” and that he is “encouraged” by the fact that no new deaths were recorded Tuesday for the first time in over a year.

His comments come amid a rash of government advisors suggesting that the slated June 21 reopening of society should be delayed.

TWEET: 15 months after ‘just stay home a few weeks to protect the NHS’ and they’re saying ‘just a few weeks’ yet again. 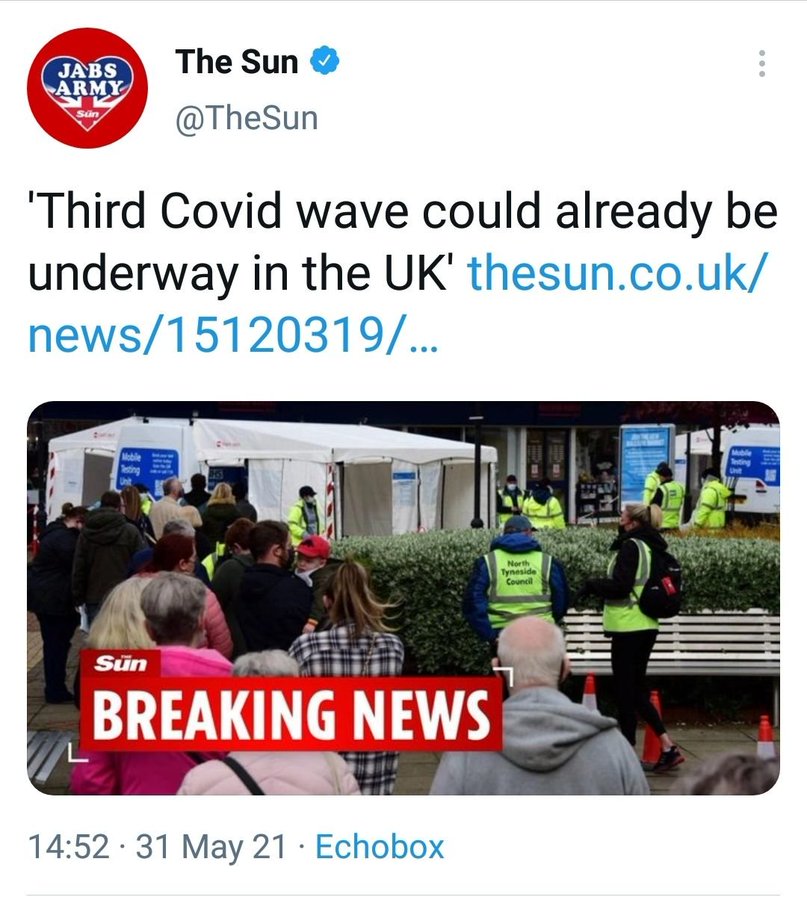 (TLB) published this article from Summit News as compiled and written by Steve Watson. It was featured on  The Liberty Beacon here

UK RELOADED THE LIBERTYBEACON WE FIGHT BACK LIBERTY RISING

Propaganda: the power of the puerile

The Smoke-and-Mirrors pandemic in a nutshell