When I saw the article below about the legendary B-52 it was immediately “old home week” in my mind, going back to my time in SAC 8th Air Force, Home Base, Pease AFB, Portsmouth, New Hampshire. A shot below for your edification:

Gen. Curtis E. Lemay was our “head warrior.”  Lemay was a cigar chomping “lets kick the sons-of-a-bitches-ass” old time Military-Industrial Complex (take no prisoners) leader. He did not take advice, he gave it. He gave it to the rest of the joint Chiefs of Staff and to whoever happened to be President at a particular time.

The B-52 was the favorite of many military leaders because of the pay-load capacity and it’s ability to go anywhere around the globe and “deliver the mail.”  Some might remember the movie Dr. Strangelove. I always felt George C. Scott had studied Gen. Lemay to prep for his role in the War Room scene:

The B-52 was a “star” in that movie in many ways as you see in these final scenes:

Not to leave you hanging…

Here is a link so you can watch the complete movie: Dr. Strangelove or: How I Learned to Stop Worrying and Love the Bomb. Click Here

Here is today’s B-52 and a story that would only warm the heart of the old neocon with aggressive military tendencies. (RE)

(USAF)
The last B-52 Stratofortress rolled off the line in 1962 and quickly became a staple of the US’s air power.

The Military Standard 1760 Internal Weapons Bay Upgrade (IWBU) program, the latest in a long line of upgrades to the B-52’s relatively ancient airframe, will allow the plane to carry ordinance inside the fuselage.

“This new capability also extends our range by reducing the amount of drag that external weapons produce,” continued Kenny.

The IWBU will first rewire the plane to drop eight JDAMs from a conventional rotary launcher bomb bay, and then they’ll reconfigure the pylons to go from holding 12 to 16 JDAMs, nearly doubling the B-52’s capacity for these high-tech bombs.

Previously B-52s were only able to drop unguided munitions, or “dumb bombs,” from the weapons bay.

“The B-52’s pylons have had the capability to speak to the digital systems on precision weapons like JDAM for years, while the bomb bay remained analog and only capable of dropping unguided conventional weapons. That’s where the IWBU comes in.” 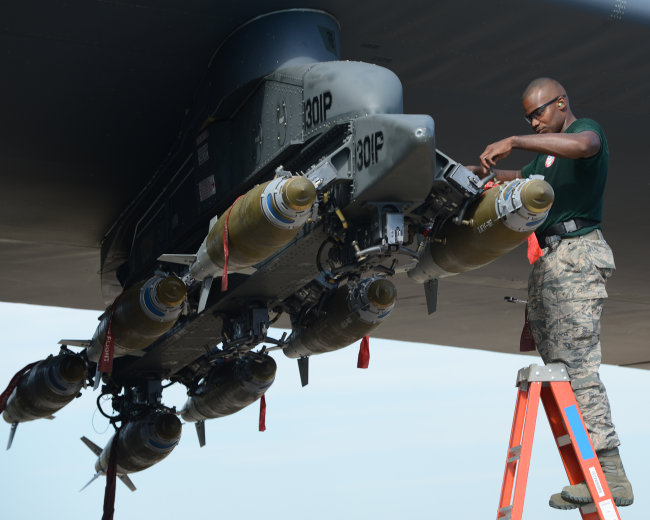 Kenny went on to explain why this small change potentially has so much meaning: “IWBU nearly doubles the number of JDAMs a single plane can carry,” Kenny said.

“This gives us the option to reduce the number of aircraft required to execute a mission, lowers our fuel requirements and provides us with more flexible load outs, enabling us to strike a wider range of target types during any given mission.”

“The B-52 has always been capable of executing a wide variety of missions,” Kenny said. “The IWBU provides more flexibility and capability in order to more effectively execute these diverse set of missions across numerous combatant commands.” 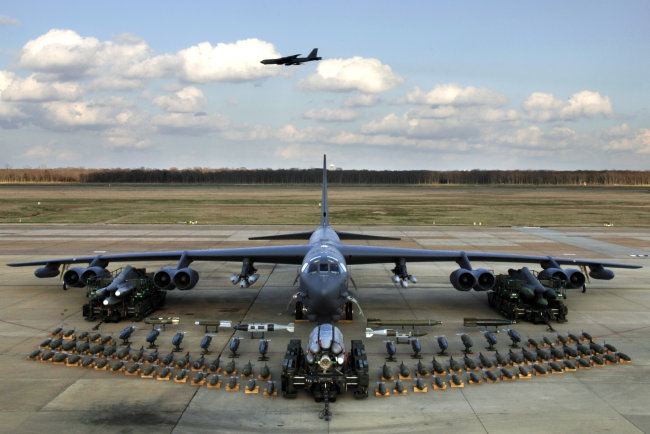 Soon the B-52 will be able to carry more smart bombs internally.

Currently, the B-52 is slated to remain active in the Air Force’s fleet until 2040, at which point it would have completed nearly a century of service. Even as the Air Force pushes toward the B-21, a new bomber platform, the B-52 remains relevant due to regular upgrades like the IWBU.

B-52s operating out of Qatar are supporting coalition and allied forces in the fight against ISIS with the Combined Joint Task Force’s Operation Inherent Resolve.

NOW WATCH: The Air Force is ready to use an upgraded B-52 bomber to strike ISIS

About the author Alex Lockie. Alex works with the military/defense and news teams at Business Insider. He is from Atlanta, and he attended Georgia State University.

Sometimes you gotta dare to dream. So here’s a really wild idea!

Modern Warfare – Death From The Sky