The Uk is not the only country where  concerned citizens have taken the government to court over the its 5G rollout on the grounds that it poses serious health risks to the general public.
A similar case is proceeding in Holland, where a report in DutchNews.nl, tells how the Stop5GNL Foundation contends that the rollout of the next-generation telecommunications network should be discontinued until it has been “sufficiently demonstrated that there are no real and serious health risks.
The requirement for any new technology – especially one that will impinge upon every living organism – to be proven safe BEFORE it is implemented is of course plain common sense.
Any government acting responsibly and in the interests of all its citizens would naturally ensure that this is the way things happen and would not under any circumstances play “Russian Roulette” with the health of its people.Yet, surprisingly, the Dutch government – along with many other governments such as that of the UK – has fallen short of due diligence in its haste to get 5G up and running.

As the Dutch group explains:“The health risks are not currently ruled out by the State and insufficient research has been conducted into this. Application of the precautionary principle is therefore absolutely necessary. If the rollout is continued, the State will expose its citizens to a real, serious and irreversible health risk.”

This comes at a time of  a growing number of arson attacks on telecoms masts across the country, although it is not known by whom the attacks, if such they be, have been carried out. A  failure to prove 5G safe is likely to provoke unrest over the safety issues – particularly the effects of 5G radiation upon children.

This runs the risk of becoming costly for the 5G companies, so cooperation with a full investigation, if they are as confident of exoneration as they claim toi be, would be to the industry’s long-term benefit.To instal 5G and THEN find out it is harming people after it has been in operation for a while of course is unthinkable, as are the possible consequences for those responsible if wilful negligence on their part should later become evident.

Yet, surprisingly insufficient honest research into the potential health risks of exposure to 5G has been consulted and by pushing ahead irresponsibly with the rollout, the Dutch government steadfastly ignores at least 252 scientists from 43 countries who have  conducted research into the harmful effects of electromagnetic fields on humans, animals and the environment.

“It is very urgent that 5G be stopped. With 5G, there will be a huge increase in antennas,” the group adds, “radiation load is expected to increase by a factor of 10 to 100. The antennas will be placed close to residential areas and on houses and buildings and will use much higher frequencies, with larger biologically disturbing pulsations and more dangerous signal characteristics.”

The group gave evidence in The Hague recently; their lawyer, Thom Beukers, argued on behalf of the Stop5GNL Foundation that the planned the rollout was “unethical”.

“You do not gamble with the health of the public,” he said.

The Dutch government evidently disagrees. According to the state lawyer, government advisors from the public health institute RIVM and the Health Council of the Netherlands have claimed that 5G does not meet critical exposure limits.

This is a bizarre contradiction with the contrary findings of a great many experts outside of the government. It further begs the question as to FROM WHOM did the pubkic health institute and Health Council get their information, how thorough was the research upon which it was based and did they depend heavily upon information fromn vested interests such as the trilluion dollar Telecom Industry?
However, the Council is said to be working on a new report, ordered by Parliament, the results of which are due in July. It will be very interesting to see what they come up with and from whom they accept information.
The Netherland is far from the only country facing resistance over the 5G rollout, which appears to be going ahead quickly whilst countries are preoccupied with the Coronavirus Lockdown.
In the U.K, for instance, telecoms operators have reported numerous cases of 5G “conspiracy theorists” setting critical network infrastructure alight.
It has become a neat propaganda ploy to try to label anyone demanding  more thorough diligence and proof of safety from the industry and its allies in government a “conspiracy theorist”. This is of course meaningless. Negligence is negligence, not a conspiracy. 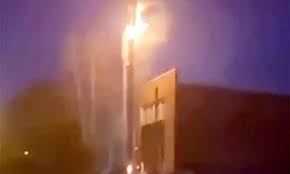 On the matter of the combusting 5G towers, observers have ponted out several worrying aspects:

There’s an uprising going on

There’s more than one way to skin a ruddy cat