Politicians harness the power of the environment

The Daily Scare can report that a tree-planting “war of promises” is now raging among the UK’s political parties as they compete in a failed attempt to convince voters that they are not as stupid as they look.

Public concerns about the environment have prompted Parliament to pass a “Brown Trouser Alert” and that in turn has catalysed an effort by the major parties to look environmental – as opposed to merely mental – in what appears to be a sincere effort to broaden the spectrum of promises they won’t keep.

The traditional Breaking of Promises

The traditional Breaking of Promises festival is an ancient tradition that has over the years produced many splendid and memorable occasions, among which are the famous “Peace In Our Time” and “No Loss of Sovereignty” and “The NHS Is Safe With Us” spectacles of yesteryear.

This year, the Festival had adopted a tree theme after the success of the Tories in breaking their promise of the last election to plant 11 million trees.

Harnessing the Power of the Environment

As all the major parties prepared to “harness the power of the environment”, the Tories were quick to point out that their failure, like all other failures since the EU began with the Roman invasion of Britain in 43 AD, was totally the fault of the EU in every respect, citing the famous European aversion to trees.

As some dissident elements among voters cling to the unreasonable expectation that election promises should be kept – or at least made with some intention of keeping them – Labour smelled blood and went for the environmental jugular by making a promise of its own: to “plant a million trees in hospitals so as to make the NHS the greenest on the planet”.

An insider told this reporter that the scheme includes planting eucalyptus trees in operating theatres as their oil clears the lungs and helps with breathing. Additionally, NHS car parks will be planted with pine trees whose sap has antibacterial properties and can be used to make salves and soaps, thus saving the NHS the billions it spends every day buying medical hand-washes from manufacturers. It will also be beneficial for nurses by providing them with a chance to supplement their meagre salaries with a second income.

Not wishing to be outdone, the Tories and LibDems entered the fray with their own tree-planting promises.

As the December election’s “Day of Doom” loomed and the nation faced the bleak prospect of having another government for five years – a very disappointing way to live out our final years before our inevitable extinction – the Tories bid to triple tree-planting rates (slogan: “And we’re not even lying this time, honest.”) starting with a bonsai oak in Boris Johnson’s window box.

The LibDems upped the stakes even higher by  pledging to triple it.

The tree-planting Poker game then escalated, with the loser being the first to blink or re-establish contact with reality, whichever came first.

The LibDems insisted with an unwavering poker face that their pledge to plant sixty million trees by next Thursday was not at all mad.

The Tories upped the ante to a hundred million trees by the year 2050, citing the hopes of  environmentalists that the “planet will be dead by 2025” as a real incentive to get things done by the end of the century.

Labour then bid two hundred million, together with plans to establish a Ministry of Trees with branches in every county (sorry, we couldn’t resist that one).

The LibDems promised to make the UK, “more tree-y than the Amazon (well, the bits not already turned into a car park for bulldozers by multinational timber syndicates)”.

The Right Wing Coalition, “Not-at-all-Nazi”, promised to plant a tree for every foreigner repatriated (or killed). Their spokes-fuhrer said,

“Every spare bit of land in Britain has an immigrant family squatting on it, thereby denying wholesome British trees a chance to grow.”

Green Housing Developments to use the Tree Motif 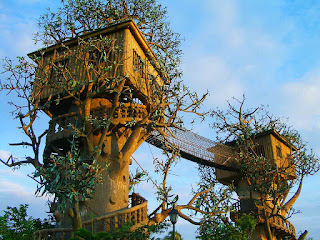 The Green Party weighed in with plans to support new, green house-building technology that harnesses the power of the tree with the construction of a “new, greener kind of housing development” throughout urban areas. (see image).

The Loony Party, however, has come up with what looks, according to opinion polls, to be a true election winner: if elected they will demolish the Houses of Parliament and replace them with a shrubbery.

The above article is from The Daily Scare

Hypochondrapocalypse: Rise of the Almost Dead

Collateral Punishment for all! Government to overhaul justice system