This featured article is a thought-provoking piece from David Siegel. Well worth reading through to the conclusion.

David Siegel: The Great Famine of the 21st Century

A cautionary tale of our future climate

The year is 2078. It is year three of a devastating drought, famine, and extreme heat event around the globe. In the last three years, some 30–60 million people have perished. It has already been called the most deadly environmental disaster to ever befall humanity.

It started with the worst drought in more than 800 years. First, there was the La Niña of 2076, which brought dry conditions to the southern United States, Mexico, and India. Then a particularly strong El Niño, in which warm winds blew warm waters west along the Equator for a record 18 months — longer than even the 1998 and 2016 El Niño events. This caused a cold-water upwelling off the coast of Peru that was like winding up a rubber band that snapped in 2077.

In the North Atlantic, another storm was brewing. In 2077, the north Atlantic was the warmest it has ever been — far warmer than the moderate temperatures measured back in the mid-2020s. This dragged moist air northward, parching a large part of Northern Brazil.

In 2077, these three major ocean oscillations all coincided at once to create the hottest, driest conditions ever recorded in India, China, Australia, and South America.

As if we hadn’t been warned. Yet it still happened. In India, crops began to fail across the entire southern half of the subcontinent. Then, it spread to the north, and by the end of 2078, eight million people in India were dead.

In China, the most lethal drought-famine in that country’s history struck the five northern provinces of Shandong, Zhili, Shanxi, Henan, and Shaanxi, leaving more than ten million dead. The heat wave spared no one in the Yellow River basin — adults, children, and animals all perished.

In Brazil, the Northeast grazing lands called the sertão practically emptied out, leaving a million bodies before the rains returned.

In all, more than 30 million people died in those three years, and another 20 million died of knock-on effects over the following decade.

Could this have been prevented?

You’d think so. You’d think people would have listened. You’d think we could have transitioned from fossil fuels in time to prevent one of the worst disasters of human history.

But you would be wrong.

Because this worldwide heat wave and famine already happened back in 1876–78. Everything I just described took place in the 19th century, long before humans started emitting much CO2. Everything I described is accurate. I just added 200 years to the dates to get your attention.

I know this isn’t what you wanted to hear. I know it isn’t what you’ve been told. It’s important for some people to believe in a bleak future, but here is the data: 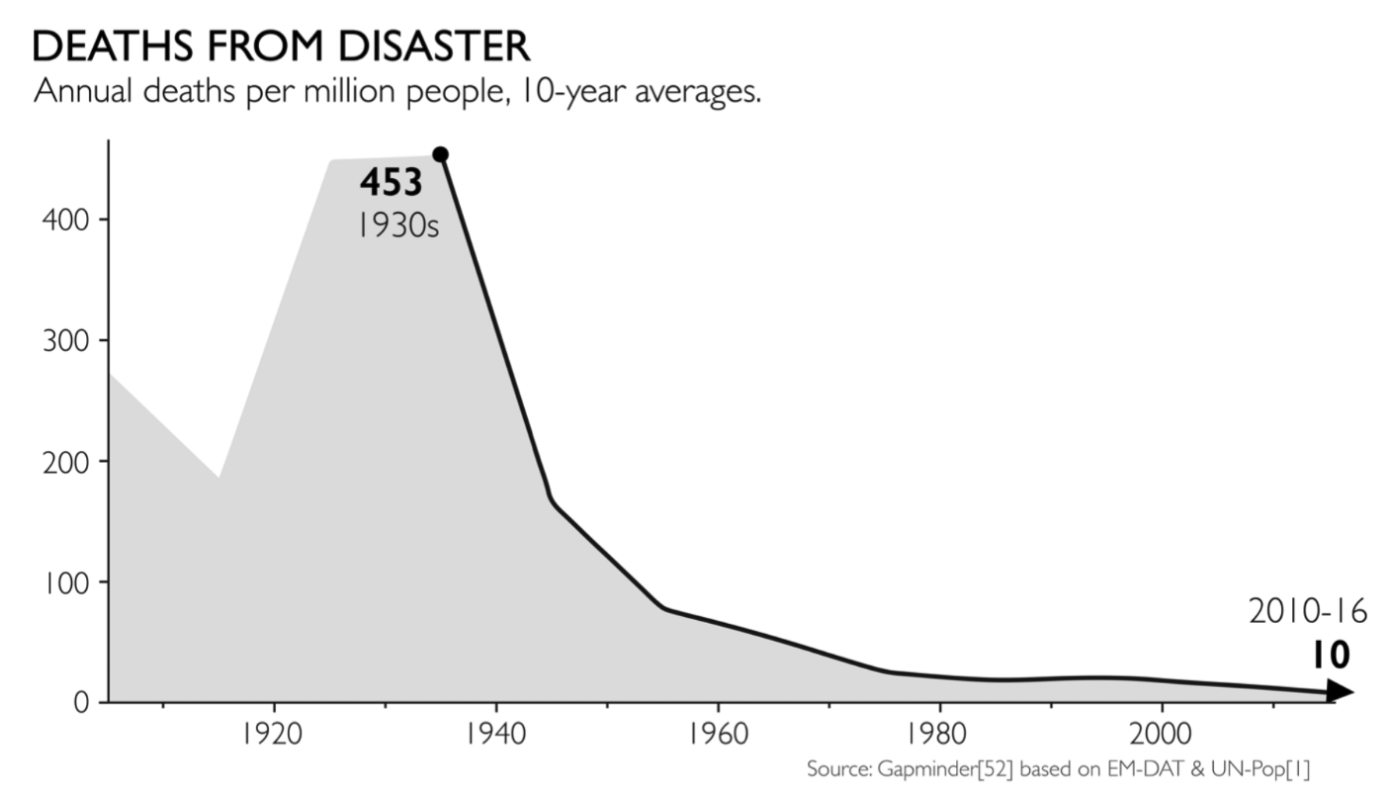 You might think: “Of course, we now have fossil fuels to protect us from the elements, so many fewer people would die today from the same heat wave.” And that’s true. But 30 million is a lot of people. Temperatures must have been extreme around the globe to kill that many.

[UKR Editor’s note:  the global population in1876 was around one sixth of what it is today so that 30 milliom would be the equivalent of 180 million today.]

Jennifer Marohasy has written about temperatures in Australia, showing this graph from the Bourke post office:

Temperatures in Burke were hotter 100 years ago than they are now.

There is evidence of government tampering with temperature data to make sure people don’t see the true natural variance. Tony Heller uses newspaper reports to confirm that temperatures before 1950 were indeed as hot or hotter than today. Sydney’s hottest day so far occurred in 1939.

Temperature reconstructions from India show plenty of heat in the 19th century:

The problem isn’t the future. The problem is what we’re doing right now. Today, humans spend more than $1 trillion every year on decarbonization, which will most likely have no measurable effect on our future climate. But it does raise the price of energy, and the current virtue-signaling environment prevents people in the developing world from reaching the standard of living we take for granted.

And yet, that same World Bank won’t lend them money to build a reliable energy grid. The United Nations and the World Economic Forum are forcing Africans to install solar and wind projects that can’t help them cook dinner, so they continue to burn trees, charcoal, and dung, destroying forests and dying of lung diseases. They are — right now — being forced to live lives we lived in 1850.

Yes, you say, but prices of solar panels are coming down! Imagine you have a car that drives really well whenever the sun is shining or the wind is blowing. No batteries, nothing, it just works. It’s not even that expensive, and it is magically zero emission. Now, can you get rid of your regular car? Or do you need to have your own back-up car for whenever the sun isn’t shining or wind isn’t blowing?

You might think you could just rent or use an Uber then, but that’s exactly when everyone else needs a car, too, so you actually have to maintain your existing car, pay the insurance, make sure it’s always available, for those times when your renewable car isn’t possible and the Uber is taken. That’s twice as many cars, no matter who owns them. That’s not “sustainability.”

People in the developing world don’t need wind farms and solar panels; they need access to cheap, reliable energy, like the people of China, France, and the US have. That is how they get out of poverty and live more fulfilling, prosperous, longer lives. Affordable energy gives us clean water. Affordable energy keeps schools open. You can’t run a hospital or even a highway without affordable dispatchable, always-on electricity. Instead, we turn a blind eye on child and slave labor needed to mine the necessary minerals for our wind turbines and solar panels while denying them a single coal plant so they can have light to read by.

The people of Africa are are caught in a trap of Western self-righteous green policies and beliefs that we’re in the middle of a climate emergency. All so people in Europe and the US can feel good about a set of invisible problems that don’t exist. This isn’t a plan to save the world; it’s a plan to keep Africa poor. Are the environmental impacts and human atrocities really worth an EV battery?

Not just Africa, but poor people around the world have been hit very hard by rising energy prices as a result of poor policy. This is called energy poverty — forcing poor families to choose between food and heating, medicines and electricity. It’s happening right now, and it’s killing millions every year.

As fuel prices rise due to poor policy, war, greenwashing, and virtue-signaling, the UK government estimates there are now more than 6 million in energy poverty; in the US it’s 16 percent of households, in Europe it’s 50–125 million people; and in Asia it’s about 1.2 billion. All of these figures are from before 2022.

Let’s be clear: if climate change threatens life on earth, if an apocalypse is truly coming, if all our lives are threatened, then you should be willing to buy and wear this t-shirt: 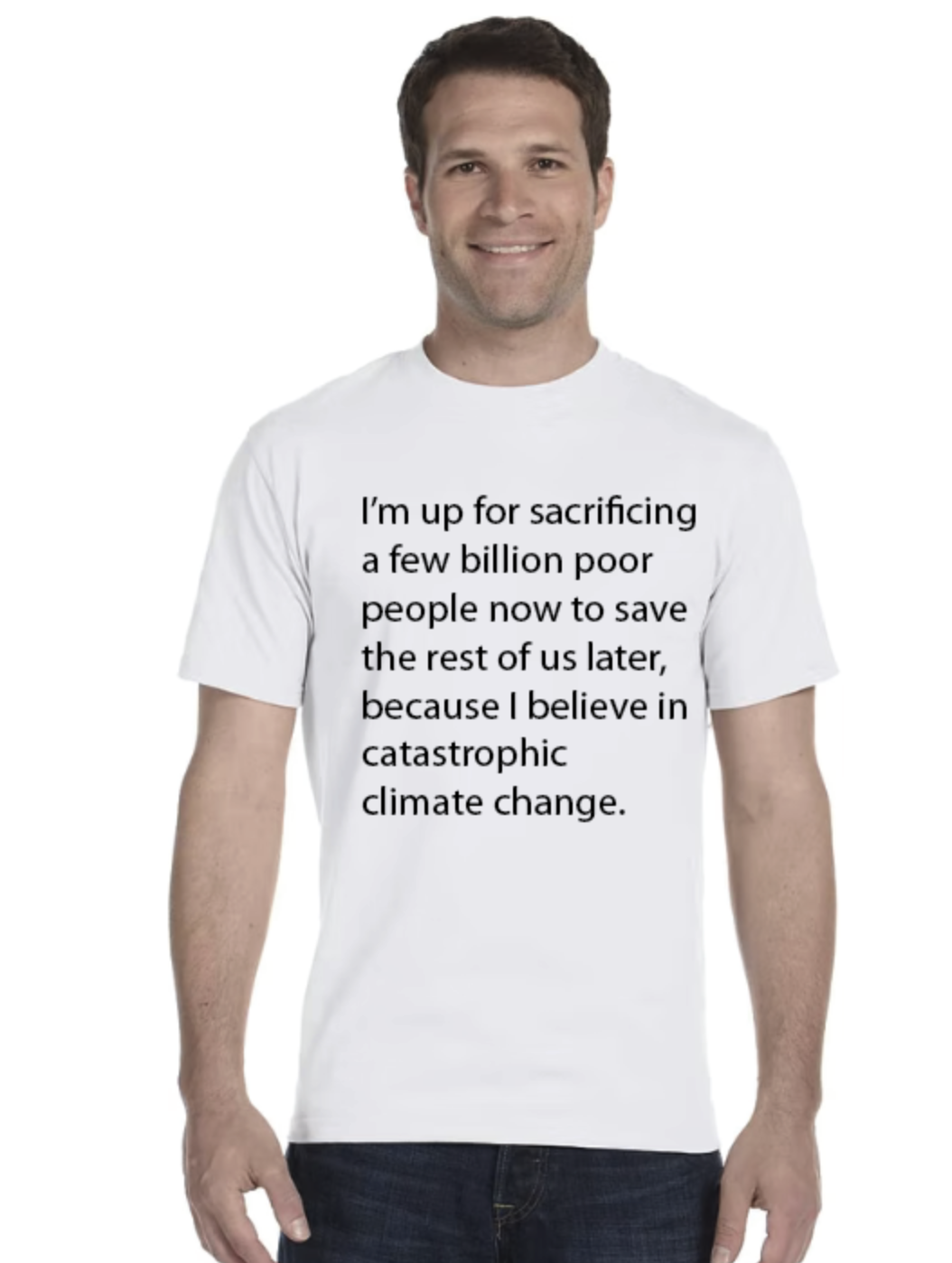 What? You’re not willing to wear that t-shirt? You thought 97 percent of climate scientists agree we are in a climate emergency? Are you sure? Are you willing to read what a Cal Tech physicist has written about the IPCC and its models of the future? Or an MIT professor who was once part of the IPCC? Or a professor of physics at Princeton?

You’d better be very sure you are right, because the cost of self-righteousness today is enormous. Decades of bad energy policy have led us to a much more fragile world, more threatened environment, insane energy prices, and doing much more harm to poor people right now than we need to. We need energy policy based on science, not myths and shared delusions.

As you have just learned, we live in the safest century to be alive. We are more protected against natural disasters than ever. And we are being lied to about CO2 and climate.

This isn’t easy for a lot of people to hear. It has become a matter of tribal and political identity. I know. In 1991, I wrote a book about how CO2 was changing the climate. But then I dug deeper and realized not everything was as it seemed. When I started to tell others the science wasn’t settled, I lost quite a few friends. If you have read this far, thank you for being brave. I invite you to take the next step at Climatecurious.com.

The Climate Hustle: the anatomy of the multi-billion dollar psyop

A race of technological wizards let down by organisational dullards