The following article gives you a very good insight into how the criminal establishment’s disinformation  arm, the BBC, slants a news item so as to propagandise the ingenious yet unfit-for-the-task windmill technology.

Why the aforementioned subversive establishment sees fit to dishonestly sell us on inadequate technology when much better and more workable alternatives exist is anybody’s guess. But the reduction of the United Kingdom to penury appears to have something to do with it.

The article is from Not Lot of People Know That, which we highly recommend you pay a visit.

What The BBC Did Not Tell You About Hornsea 2

More renewables propaganda from the BBC: 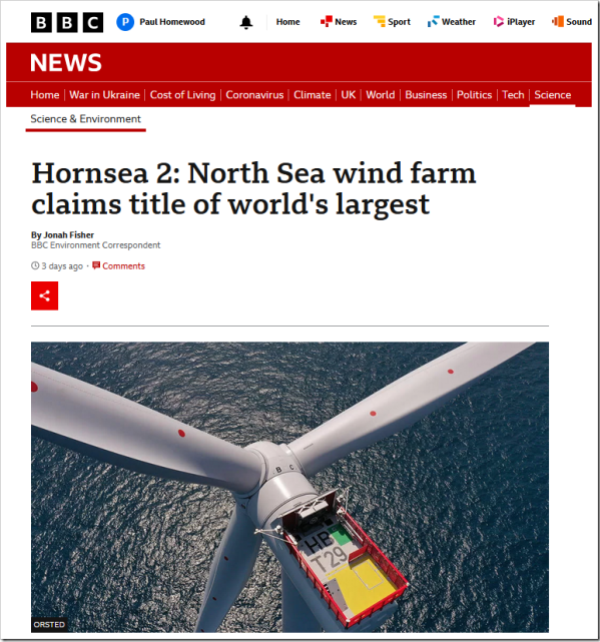 The world’s largest offshore wind farm is now fully operational, 55 miles off the coast of Yorkshire.

The Hornsea 2 project can generate enough electricity to power about 1.3 million homes – that’s enough for a city the size of Manchester.

A decade ago renewables made up just 11% of the UK’s energy mix. By 2021 it was 40%, with offshore wind the largest component.

Hornsea 2 is part of a huge wind farm development by energy firm Orsted.

“The UK is one of the world leaders in offshore wind,” Patrick Harnett, programme director for the Hornsea 2 wind farm told BBC News.

“This is very exciting after five years of work to have full commercial operations at the world’s largest offshore wind farm.”

Hornsea 2 has taken the title of “world’s largest” from its neighbour Hornsea 1. It covers an area about four and half time the size of Liverpool. With even larger projects under construction nearby in the North Sea it’s unlikely its title will last long. The Dogger Bank wind farm, which when fully built will be able to power 6m homes, is due to start coming on stream next year.

Each of the 165 turbines in Hornsea 2 stands about 200m tall from the sea level to the top of the 81m blades. Mr Harnett says a single rotation takes six seconds and provides enough energy to power a home for a day.

Over the last decade the size of wind farms and turbines have both increased, helping to bring down the cost of the electricity they generate.

“The last time I checked it was roughly £450 per megawatt hour to buy electricity generated by gas,” says Simon Evans from Carbon Brief, a website that follows renewable energy issues.

In the UK government’s latest auction round in July, 11 gigawatts of renewable energy was commissioned which is enough to power about 12m homes. As part of it’s Net Zero targets the government has committed to de-carbonising electricity generation by 2035, with offshore wind playing a crucial role.

The claim that Hornsea can supply 1.3 million homes is the usual renewable lobby spin – they only account for domestic consumption, which accounts for a third of all electricity, and ignore other users of electricity such as industry, commerce and the public sector.

Somehow, I suspect Manchester would end up looking like Deadwood Gulch, if schools, hospitals, industry and transport were not supplied with any electricity!

In overall national terms, Hornsea 2 will supply about 1.5% of the UK’s power, still a sizeable amount, so why doesn’t the BBC tell the full story?

But much more importantly, Hornsea will be hopelessly intermittent, just as other wind farms are. We now have three years of data from Hornsea 1, and the charts below show just how variable the output there has been:

Maybe the BBC would like to explain what the good folk of Manchester are supposed to do for about half of the year when output is below average?

.Then we get the claim by Carbon Brief that wind power costs a ninth of gas generation, about £50/MWh for new generation. Hornsea 2 has a CfD for £73.71/MWh. But as The Times revealed this week, Orsted, who own Hornsea 2, have not taken up their contract, and are instead selling on the open market, something you will be unlikely to hear from the BBC.

All of the electricity generated by Hornsea 2 will be sold by its parent company, Orsted A/S, the Danish state owned company, formerly known as DONG.

Their Half Year Accounts show they have been selling all of their electricity generated at an average of £219/MWh this year, up from £82/MWh last year. In a full year, this price rise means a windfall profit of £4.5bn, most of which will accrue from UK operations.

But neither the BBC nor Carbon Brief will ever tell you this. 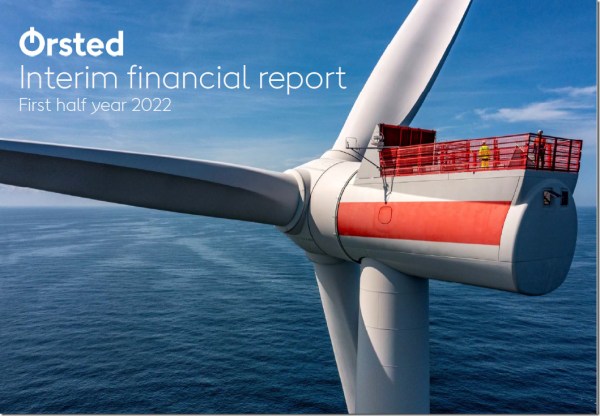 Your government is lying but it is also very predictable

War on humanity update: major cock-ups by the so-called “Elite” hasten its demise