Trust in the media is lower in the UK than virtually anywhere.

It is a mistrust that has been well earned as millions of us have had to  watch the current spectacle of the “independent” media mobilise en masse as the propaganda arm of its globalist masters’ current project, the COVID19 psyop, hysterically  driving in the fear-mongering upon the bemused populace with one distortion, half-truth, falsehood, and fabrication after another.

Yet millions of Brits see through it. The globalists’ propaganda arm is becoming a withered limb.

We Brits are smarter and less credulous than they think.

Fear to tell truth, smoke & mirrors, writing not for readers but for other journalists – How UK press got to be the LEAST trusted

Neil Clark is a journalist, writer, broadcaster and blogger. His award winning blog can be found at www.neilclark66.blogspot.com. He tweets on politics and world affairs @NeilClark66

Trust in the written press in Britain is the lowest in 33 European countries. That’s hardly surprising seeing how so many journalists have become mere stenographers for, or lackeys of, the Establishment power elites.

Just when you think the reputation of the UK media couldn’t sink any lower, it just did. An annual survey undertaken by EurobarometerEU, across 33 countries, puts the UK at the bottom, with a net trust of -60. Yes that’s right, minus 60. It’s a fall of 24 points since last year. Just 15 percent of Brits trust their print media. But it’s not the only survey showing a similar trend.

The attached graphic about trust in the written press, published last week, has not been widely reported in Britain. This is a huge annual survey by @EurobarometerEU across 33 countries. It’s the ninth year out of the past ten that the UK has been last. We have a problem. 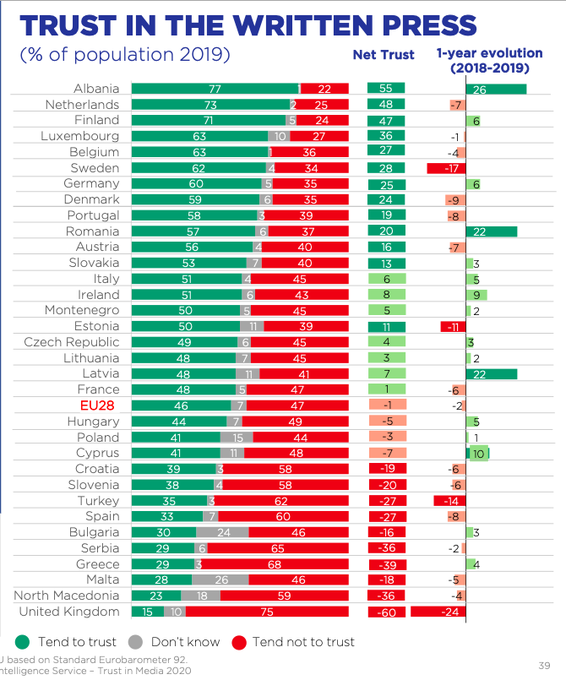 Newspapers came in rock bottom (with a rating of -50) in a YouGov poll on Sky where the question was asked, “How much do you trust the following on Coronavirus?” And in case you think it’s only the Sun we’re talking about here, another poll showed that distrust of so-called ‘upmarket’ papers was running at 52 percent.

How did we get here? I’ve got a collection of old newspapers and magazines dating back several decades. Part of the problem is that newspapers have morphed into viewspapers. The distinction between reporting and comment has been blurred. Back in the 70s, leading publications only had one comment piece and an editorial. Their pages were packed with news items, with stories reported factually and without a ‘bent’.

Today, comment has taken over, but while there’s no shortage of ‘opinion’, most of it is saying very much the same thing. I think we first saw this phenomenon in the lead up to the Iraq War. I was one of the very few mainstream commentators who ridiculed the claim that Iraq had WMDs. It was obvious to me that if the leaders of the UK and US genuinely believed Saddam possessed these terrible weapons, they wouldn’t be planning to do the one thing which would provoke the Iraqi leader into using them, i.e. invade his country. Yet the Great WMDs Hoax, which a child of five could see through, was promoted by nearly all ‘serious’ journalists. The most vociferous media cheerleaders for the invasion faced no professional blowback, on the contrary, their careers have flourished.

As bad as the Iraq War propaganda was, things have got even worse since then. Obnoxious  gatekeepers have ensured that the parameters of what can and can’t be said in print have narrowed still further.

In the mid-Noughties, I was writing regularly in the UK mainstream print media. So too was John Pilger. Our articles were popular with readers, but not with the gatekeepers. When I wrote a balanced, alternative view on Belarus for the New Statesman in 2011, I came under fierce gatekeeper attack.

I forgot that on Belarus and many other issues, only one point of view was allowed. Silly me.

Only one thing can save UK print press

Today, the lack of diversity of opinion is one of the reasons why newspaper sales have crashed – (sales have slumped by two-thirds in the past 20 years), and conversely why ‘alternative’ sites, and media outlets where a wide range of opinions ARE heard have done so well. Who wants to pay money for a paper when the political views published in it range from pro-war centrist-left, to pro-war centrist-right?

If there was a single newspaper or magazine column which examined forensically whether  Labour really did have an anti-Semitism ‘crisis’ under Jeremy Corbyn, I must have missed it.

And apart from Mary Dejevsky in the i paper, where was the journalism examining the many inconsistencies in the official narrative of the Skripal case? Why has ‘Private Eye’, which bills itself as ‘anti-Establishment’, not covered the ongoing Philip Cross Wikipedia editing scandal?

And what about the Covid-19 coverage? Has any journalist asked the very simple question: if the virus is as bad as the government says it is, and a domestic lockdown is necessary to stop its spread, why have flights continued to come into the country (including from virus hotspots) unchecked? I’m sure the old ‘Eye’ of Richard Ingrams and Bron Waugh would have if Wikipedia had been around then.

Don’t get me wrong, there are still some good columnists out there, but sadly you can count them on one hand.

The only thing that can save UK print media from total collapse is if there is a large-scale clear-out of the faux-left/neocon-dominated commentariat and their replacement by writers who actually address the issues that readers are interested in. Newspapers used to be published for their readers, now it seems most are published for people who write for other newspapers – and to enable ‘Inside the Tenters’ to congratulate each other for their ‘brilliant’ articles on Twitter.

The smug, mutual back-slapping nonsense, seen at its worst at journalist ‘award’ ceremonies,  has gone on for too long. We need more old-style chain-smoking journos, not frightened of telling truth to power – and less smoke and mirrors.

Trust in British print media can be restored, but only if we go back to the future.

The above article is from RT.com. Visit RT.com for many more great articles.

1 Comment on The globalists’ propaganda arm becomes a withered limb as Brits en mass lose trust in their media.