A new report finds “shocking evidence of poor and restrictive practices” at mental health hospitals across the country.

Anne Longfield found many children are admitted unnecessarily and go on to spend years in institutions as part of a system that is letting them down.

Her report also found “shocking evidence of poor and restrictive practices”, including sedation, segregation and the use of physical restraint.

The report concludes: “This research has shown that too many children are admitted to hospital unnecessarily and spending months and years of their childhood in institutions when they do not need to be there.”

Ms Longfield’s report comes at the start of a week that will see a focus on the treatment of those with autism or learning disabilities.

On Tuesday, the Care Quality Commission is expected to publish its own highly critical review of the sector, which will make recommendations to Health Secretary Matt Hancock.
These will include closer scrutiny of care by those commissioning it, and reviewing the way the CQC itself inspects learning disability and autism units.

The CQC review follows the exposure of shocking failures of care.

Responding to the “very serious” report, Mr Hancock revealed he would be making formal announcements on patient advocacy later this week.

“And that there is an advocate for those young people because they often aren’t in a position to speak for themselves in terms of the care they should be getting.

“The really sad thing about this is that often it is more expensive to keep them in inpatient settings like these that are inappropriate for them, and they should be getting more support in the community.

“It is also very difficult to get it right because some people do need to be in an inpatient setting.

“But these are some of the most vulnerable people in society and I’m determined to act and get it right.” 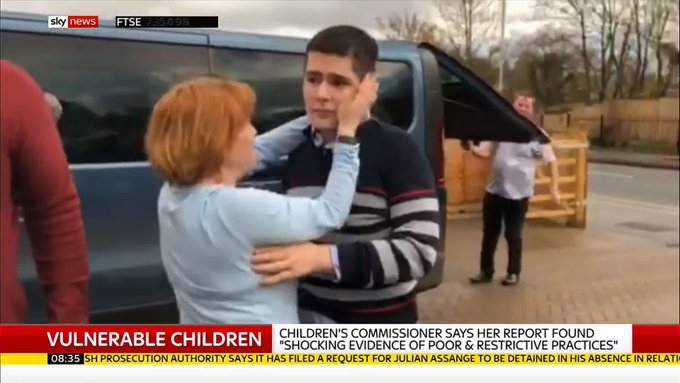 “I thought they were going to kill my son.”

Mr Hancock added: “I’m absolutely determined to act because the story you tell is so important and underlines why we need to get this right.”

Last October, Sky News revealed that 40 people with a learning disability or autism have died while admitted to secure treatment units since 2015 – and told the story of a man who has spent 19 years in one unit.

The government and the NHS has missed its own target of cutting the number of people receiving in-patient care by up to 50% by March, and has now reduced the ambition to a 35% reduction and shifted the deadline back five years.

The children’s commissioner’s report states: “Despite report after report and successive government programmes to address this problem, the number of children in hospital remains unacceptably high.”

The report says 250 children with a learning disability or autism were identified in a mental health hospital in England in February 2019, compared to 110 in March 2015.

Line 18: ‘My autistic son deserves a life but he’s locked up’

Ms Longfield said: “I will never forget the stories I heard from mums and dads at a meeting I arranged for parents with children in these units and their tears of frustration and anger.

“Some of them have a child who has been locked away in a series of rooms for months.

“Others have to listen as they are told by institutions that their child has had to be restrained or forcibly injected with sedatives. They feel powerless and, frankly, at their wits end as to what to do.

“A national strategy is needed to address the values and culture of the wider system across the NHS, education and local government so that a failure to provide earlier help is unacceptable, and admission to hospital or a residential special school is no longer seen as almost inevitable for some children.”

A government spokeswoman said: “We are determined to reduce the number of autistic people or people with learning disabilities in mental health hospitals – significant investment in community support has already led to a 22% reduction since March 2015.”

Disclaimer: UKReloaded.com contains copyrighted material the use of which has not always been specifically authorized by the copyright owner. We are making such material available to our readers under the provisions of “fair use” in an effort to advance a better understanding of political, health, economic and social issues. The material on this site is distributed without profit to those who have expressed a prior interest in receiving it for research and educational purposes. If you wish to use copyrighted material for purposes other than “fair use” you must request permission from the copyright owner.

Noshi-Do: alimentary self defence. How to Defend your Brain

Psychiatry is a mental disorder